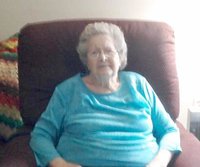 FORT PLAIN – Anna M. Nellis, 94 formerly of Timmerman Ave., St. Johnsville, NY passed away peacefully Wednesday, February 14, 2018 at the home of her daughter Barbara Masi on State Highway 5S, Ft. Plain, NY with who she has resided since 2006. She was born on April 22, 1923 in Stone Arabia, NY (T/Palatine) the daughter of the late Victor and Marion (Christman) Putman. She was educated in Stone Arabia Rural Schools. She was first united in marriage to Carlton Blencoe who predeceased her in 1967. In June of 1971 she was united in marriage to Donald Nellis at the Grace Congregational Church, St. Johnsville. Mr. Nellis predeceased her October 4, 1999 a union of 28 years. Mrs. Nellis attended the Grace Congregational Church, St. Johnsville and was active in the Ladies Fellowship of that church. She also enjoyed bowling in various leagues in the area for many years. She was employed as a Cutter for the former Allegro Shoe Corp., Little Falls, NY. She is survived by her daughter, Barbara Masi and her husband David, Ft. Plain and her step daughter, Donna Buzzoni and her husband Frank, Florida, her sisters, Bernice Dodds, Florida and Margaret Steffenhagen, Palatine Bridge, eight grandchildren, Michael Masi (Sonia), Little Falls, Phillip Masi, Pennsylvania, Daniel Masi (Yovonne), Fultonville, Lisa Delaney (John), Little Falls, Brian Blencoe, Florida, Nancy McFadden (James), Sharon Springs, Frank Buzzoni and Stephen Buzzoni, many great grandchildren, nieces and nephews. She was predeceased by her brothers, Gordon and Elmer Putman, her sister Dorothy Saltsman, her grandson, David Joseph Masi in 2000, Her daughter in law Linda Blencoe in 2011 and her son Robert Blencoe on December 31, 2017. Funeral services will be held on Monday, February 19, 2018 at 11:00 am from the Chapman-Moser Funeral Home, Inc., 42 N. Ann Street, Little Falls, NY with the Rev. R.W. Williams, Chaplin of Mt. Valley Hospice officiating. Interment will take place in St. Johnsville Cemetery, St. Johnsville in the spring. Relatives and friends are invited to pay their respects at the funeral home on Monday. February 19, 2018 from 9-10 am and to attend the funeral services to follow. It is the wish of the family that contributions in memory of Mrs. Nellis be considered to the Mt. Valley Hospice, 108 Steele St., Gloversville, NY 12078. Envelopes are also available at the funeral home for this purpose.