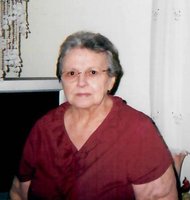 LITTLE FALLS – Florence S. Leon, 84 of Flint Ave, Ext., Little Falls, NY passed away Saturday, December 22, 2018 at Albany Medical Center, Albany with her loving family at her side. She was born on February 19, 1934 in Little Falls the daughter of the late David H. and Bessie (Dygert) Jones, Sr. She was educated in area schools. On February 14, 1955 she was united in marriage of her husband of 63 years Dayton B. Leon, Sr. in Marcy, NY Mrs. Leon enjoyed spending her time reading. She was of the Catholic faith and found comfort in her daily devotional and bible readings. For many years Mrs. Leon was employed as a private duty CNA and was a Nurses Aid at Little Falls Hospital. She retired from the Central Supply Division of Little Falls Hospital after many years of service. She is survived by her husband Dayton, her sons Dayton B. Leon, Jr. and his companion Elizabeth Reginato, Virginia and Joseph Leon, Little Falls, her daughters Kim Mahoney and husband Richard, Herkimer, Cynthia Uhlig and husband Ron, Herkimer, Deborah Jones and husband Tom, Little Falls, Tonya Leon and companion Steven Slaboc, Stratford, Analisa Judge, Little Falls and Holly Dreueske, Ilion, her sisters, Betty Michaniw And Helen Verro both of Rome, many grandchildren, great grandchildren and several nieces and nephews. She was predeceased by her sons Lamar (Mark) Leon, 2010 and Todd Leon, 2016, her brothers Garnet Jones, 1970, Arthur Jones, 1985 and David H,. Jones, Jr., 1990, her sisters Winifred Yager 1982, Irene Matthews, 1985, Catherine LaVesque, 1986, Arlene Proper, 2016 and Ethel Deming, 2017 Relatives and friends are invited to pay their respects at the Chapman-Moser Funeral Home, Inc., 42 N. Ann Street, Little Falls, NY on Sunday, December 30, 2018 from 1-3 pm. Graveside services will be held at Church Street Cemetery, Little Falls at a time and date to be announced in the spring of 2019. It is the wish of the family that contributions in memory of Mrs. Leon be considered to the St. Jude’s Children’s’ Hospital, 501 St. Jude’s Place, Memphis, TN 38105. Envelopes are also available at the funeral home for this purpose.