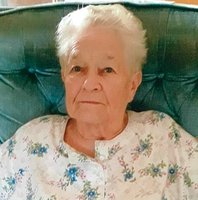 Mrs. Esther M. Williams, 88, of Dolgeville, New York passed peacefully on July 27, 2021 in the comfort of her home, following a brief illness. At the time of her passing, she was surrounded by her loving family. She was born in Little Falls on November 7, 1932, the daughter of the late Jesse Walrath and Lula Sweet Walrath. She attended local area schools. In 1994 she retired from Gehring Tricot Corporation after 40 plus years of employment, most recently working as a Tacker. She had been a resident of Dolgeville for the past 55 years, prior to that she resided in Curtis, NY. She was of Methodist Faith, enjoyed gardening, planting flowers, (especially red ones), going to church dinners and spending time with family and friends. On August 23, 1949 at the Salisbury Grange she married her husband Cassius Williams, who pre-deceased her on September 24, 1993. She was also pre-deceased by her son Richard "Dick" Williams on January 24, 2012, and by her siblings; Betty, June, Kathy, Virginia, Violet, David, and Albert. She is survived by her sons; Robin "Bob" and his wife Mary Williams, Bernard and his wife Margaret Williams, David and his wife Norma Williams, Michael and his wife Donna Williams, Scott and his fiancé Vicki Herringshaw ; her daughters, Laurie and her husband Michael Ellsworth, Michelle and David Ellsworth; daughter-in-law, Martha Williams; Sister Debbie Randall; 38 Grandchildren, 36 great-grandchildren, several great great grandchildren, as well as several nieces, nephews and cousins. A Funeral Service will be held on Saturday July 31, 2021 at 1:00PM at Chapman-Moser Funeral Home, 42 N. Ann Street, Little Falls, NY 13365, with burial following after at Curtis Cemetery. The family will receive friends and relatives from 4:00-7:00 PM on Friday July 30th, 2021 at the funeral home. In lieu of flowers please consider memorial contributions to The American Cancer Society, 1 Penny Lane, Suite 1, Latham, NY 12110.