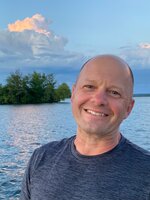 Mr. Scott K. Davies, 50, of Dolgeville, NY, died unexpectedly on April 27, 2022. He was born in Warsaw, NY on June 25, 1971. Scott graduated from Warsaw Central School, Class of 1990. He went on to graduate from SUNY Brockport with a bachelor's degree in Psychology. Scott had been a local area resident since 2002 and had retired from the Dolgeville Police Department in 2021. He was a communicant of St. Joseph's Catholic Church of Dolgeville. He enjoyed hunting, fishing, being outdoors, traveling, and weightlifting. Scott was a selfless and kind man who was a loving husband and exceptional father. In 2002, at St. Joseph's in Dolgeville he married Melanie Cooper. Survivors include his wife, Melanie A. Davies, his daughter Annaliese Davies, son Aiden Davies, mother Gail and stepfather Steven LaCroix, father Keith Davies, brothers Shannon and his wife Stephanie, David LaCroix and his fiancé, Annalise Marotta, paternal grandmother Jeannette St. Don, many nieces, nephews, cousins and friends. A private mass will take place at the convenience of the family. Anyone wishing to make a memorial contribution in Scott's memory, please consider a charity of one's choice.